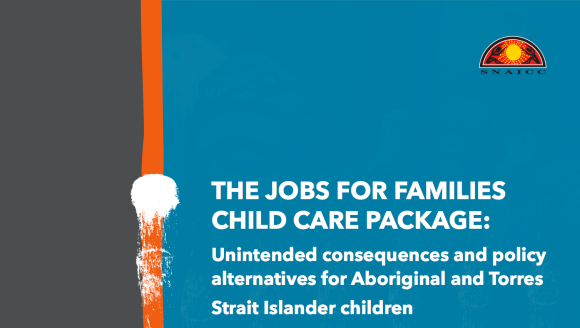 A report from Deloitte Access Economics for SNAICC released today revealed the concerning impact of the Federal Government’s “Jobs for Families” package for Aboriginal and Torres Strait Islander children and their families.

The Deloitte research shows 40 per cent of families using the BBF services would receive fewer hours of subsidised care.

It also shows 54 per cent of families using BBF services would have higher out-of-pocket costs and the biggest impact would be felt by families earning less than $65,000.

Hilariously, the Federal Government has claimed the report is inaccurate and fails to take into account other elements of their reform package – despite the fact that the Government has consistently failed to reveal huge amounts of actual information the proposed reforms, both through the Regulatory Impact Statement process and in the proposed legislation currently before the Senate.

The Child Care Subsidy is only vaguely described, how it can be applied for and received is basically unknown, and how children and their families’ situations will be monitored on an ongoing basis is not described.

The economic benefits of the Jobs for Families package are dubious at best. The impact on children and families at-risk and experiencing vulnerability is crystal clear. The argument that this package is “OK with a few amendments” is becoming increasingly difficult to swallow.

I am available to be commissioned for freelance writing, editing, event speaking and consulting work.

Liam is an experienced early childhood teacher, writer and advocate. He is a regular commentator on Australian and international early learning policy, advocacy and quality issues.